The Bitcoin Bubble is popping… this time for real… because Bank of America says so. For the 278th Time.

Bitcoin is not only the king of cryptos but also the king of bubbles. According to Bloomberg, a study by Bank of America Merrill Lynch on the behavior and evolution of Bitcoin’s prices places it as the most significant asset price bubble in history.

The study compares the price trends of bitcoin with other similar phenomena such as the U.S. stock market in 1929 crash in the Stock Markets, the Mississippi Company, and South Sea Company in the 18th century, the behavior of gold pricing, and the famous Dutch Tulip bubble. 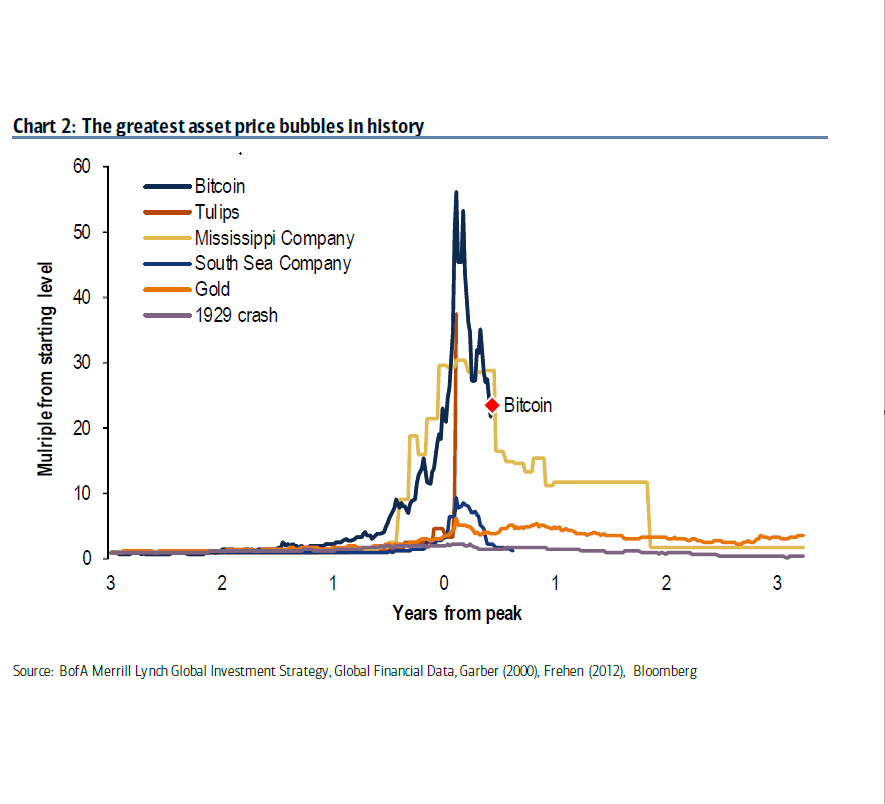 The graph attempts to show that of all the bubbles, bitcoin is the one that has achieved the most significant growth in the narrowest range of time. Whereas the most critical bubbles such as tulips have a value of less than 40x increase in value, the graph shows an increase (in a similar timeframe) of at least 60x for Bitcoin.

In the last few months, the Bank of America has been very attentive to the behavior of bitcoin, and while just a few weeks ago they told the SEC at about the danger that Bitcoin posed to the expansion of their financial services, today their research results do not seem to contrast with their previous assessments. Such claims are not new to the world of Bitcoin: 99Bitcoin has kept track of how many times the media has “killed” Bitcoin, and with 278 “deaths” registered since 2010, an average of almost three rumors per month is more than enough reason to show that it is not always necessary to believe what the powerful say.

Just as an example, let’s look at the behavior of Bitcoin prices today: 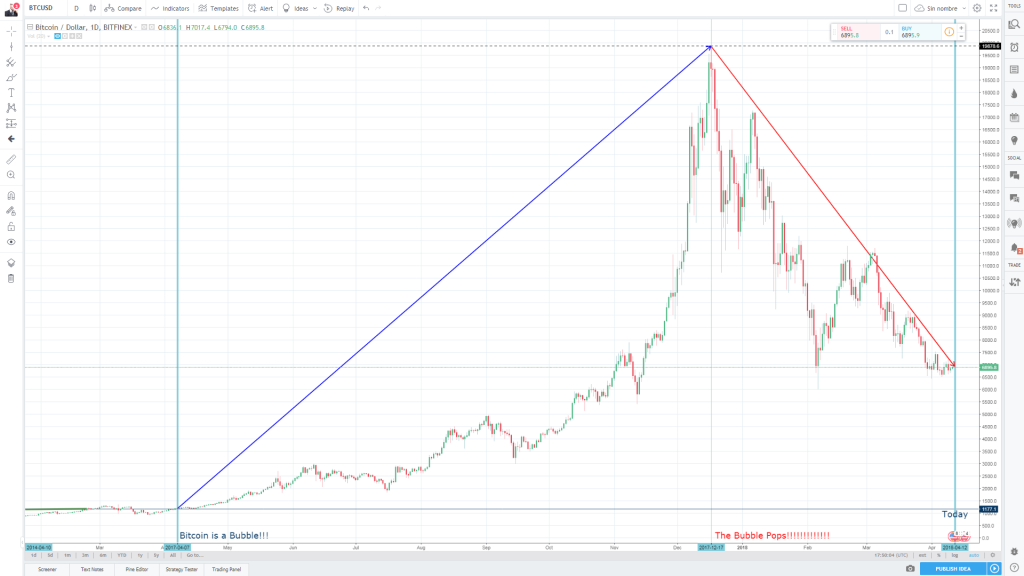 That looks pretty “Bubbly”, right? In weeks BTC has lost almost 60% of its value!… And the trend does not seem to stop

Before we forge a response, let’s look at a bit of a similar graph: 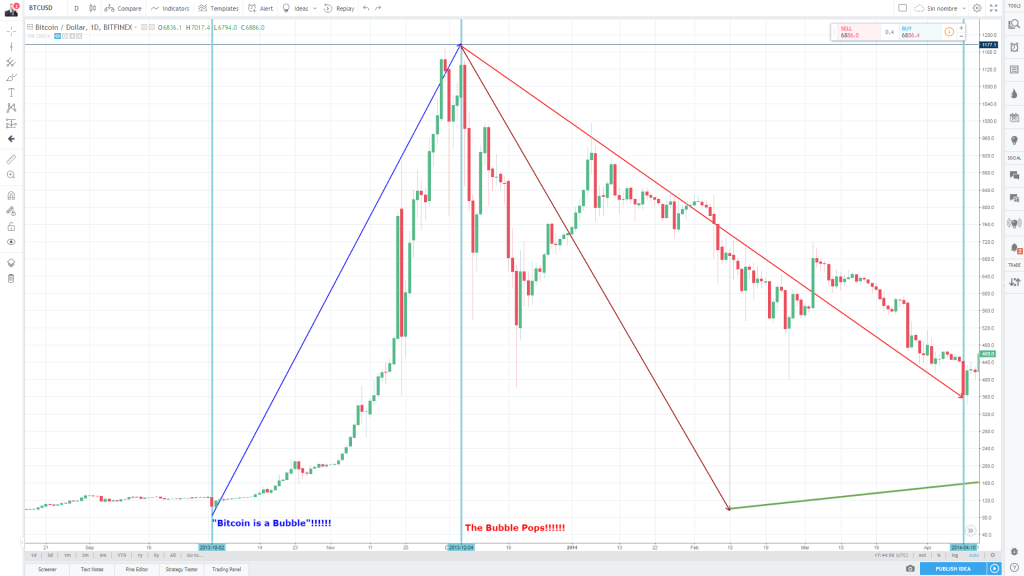 This graph, as you can see, shows a previous BTC price fluctuation. What is happening now is nothing new, it has already occurred (and in worse proportions), and it is merely part of the natural behavior of an asset that is being capitalized, and that is not only being inserted into the market but is radically changing it. It is unfair to make such decontextualized comparisons, so let’s put things into perspective a little and analyze this graph. 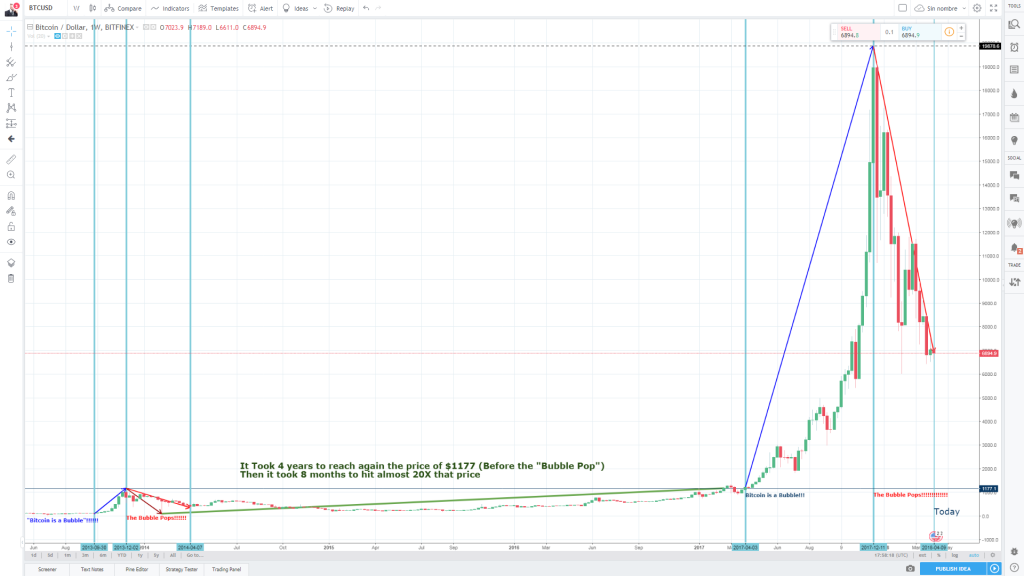 Bank of America research is either decontextualized or charged with the subjectivity of an institution that studies a phenomenon considered “risky” for its existence.

On social networks, the community has expressed some opinions. A notable example is Blockchainchick who made a comparison of Bitcoin with the opinions spread towards Amazon; a company that has been able to demonstrate its successful career despite the FUD that it suffered during its consolidation.

Bitcoin has arrived in the world of finance to stay. Although the future is not written, the confidence of the users and the massive adoption will put a number on its future price; confidence can easily be damaged by third-party opinions (Pump and Dump, anyone?). However, if there is one thing that characterizes the community of crypto users it is that despite the nervousness they may have in the short term, there is always unity and optimism in the paradigm shift that cryptos can achieve… and that is perhaps the best reason to prove that Bitcoin will be bullish soon.

I, personally, prefer one bitcoin over one tulip.