The cryptocurrency market corrected somewhat over the weekend but has since made its way back up. It is now sitting over the $400 billion mark, the first time the market has broken over this price threshold in 7 weeks. Presently, Bitcoin (BTC) is just below the $9,000 mark and Ethereum (ETH) is sitting under $650. Today, we’re taking a closer look at Ripple(XRP), Stellar(XLM), and Dentacoin(DCN). 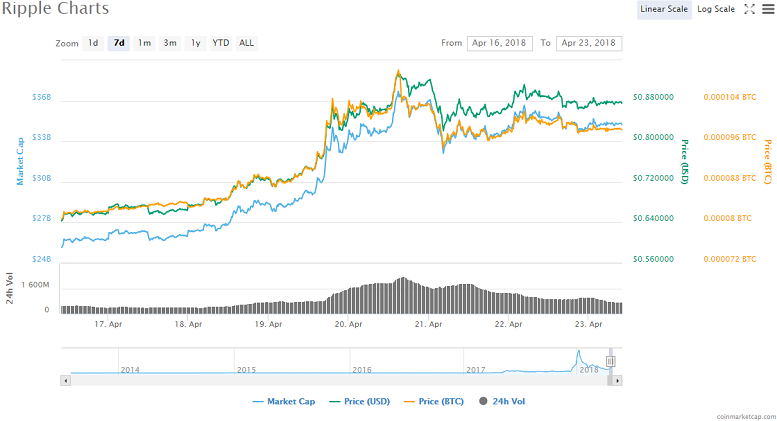 XRP had quite the run-up in price this past week but has since corrected. Gary Gensler, the top financial regulator for the Obama administration and former Goldman Sachs partner, spoke to the New York Times about his views on Ripple and Ethereum, yesterday. Gensler believes that Ether and Ripple were issued and traded in violation of American securities regulations. In the interview he said:

“There is a strong case for both of them — but particularly Ripple — that they are noncompliant securities.”

The teams behind both of these projects have spoken out in the past, arguing that their tokens are assets and not securities. Presently, the Securities and Exchange Commision (SEC) and the Commodity Futures Trading Commission are trying to figure out how to properly categorize and regulate these digital currencies. The main focus in the past has been on Initial Coin Offerings (ICOs) and the smaller cryptocurrencies, trying to monitor fraud but the pair has recently pivoted to regulating the cryptocurrency exchanges. It seems 2018 will be the year they try to get ahead regulation wise of all the aspects of cryptocurrency.

Gensler ended his interview by saying:

“2018 is going to be a very interesting time. Over 1,000 previously issued initial coin offerings, and over 100 exchanges that offer ICO, are going to need to sort out how to come into compliance with U.S. securities law.”

There is no big news to report on the Stellar project front. While there are many new dApps being built on the Stellar network, there is nothing that really stands out that would heavily effect XLM’s price. Recently, Stellar concluded its 6th Build Challenge that didn’t go without complications.

Still, the cryptocurrency remains as the 8th largest on the market and is still a force to be reckoned with its cross-border payment network.

The Stellar team is kicking off May with a meetup in Dubai, named “Blockchain and Fintech”. With the team showcasing what the Stellar platform can do on such a large stage, I see the price of XLM rising shortly after the event – for all you day traders reading this.

It remains unclear as to why Dentacoin is suffering the most losses today on the cryptocurrency market. Presently, the ERC-20 token, DCN, is accepted as a payment currency for dental services in Australia, the UK, India, and the US. Dentacoin offers three distinct reward features as an incentive to maintaining dental health. The first is “Dentacoin Trusted Reviews” which offers rewards for providing trustworthy and detailed reviews about each dentist you’ve received treatment from. The focus is on quality of care and education.

The second rewards program is “Dentacare”, where the project rewards you for participating in a 3-month program aimed at preventative tooth care. The third program is “DentaVox”, which is a research-driven platform that rewards its users for opinions on how to improve dental care.

While Detnacoin is far from full completion, like many projects in the emerging blockchain space, its review platform launched its main net Q4 of 2017. At press time, DCN is trading at $0.000842 a coin, down -28.55%, in 24 hours. You can currently trade for DCN on HitBTC, Cryptopia, CoinExchange, Mercatox, BuyUcoin, Coin Falcon, and IDEX.

HomeNewsCrypto NewsFake Twitter Accounts and Scam Giveaways – A Problem for Crypto? If you’re in the crypto sphere on Twitter, then you’re […]