Gold and silver have risen substantially off the price bottom put in just 2-½ years ago, but the gains have yet to attract much notice. Gold has gained roughly 28% and silver is up 20%.

Meanwhile, another metal has more than doubled since bottoming. This performance should have been more than enough to catch the attention of metals investors, if only they were watching. The metal is palladium and, for those who haven’t paid much attention, it is time for a brief update.

Palladium is one of the platinum group metals (PGMs) and it has a lot in common with its higher profile brother. 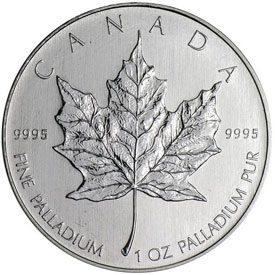 Palladium Maple Leaf coins are
as low as $29 over spot

Like platinum, palladium is a lustrous, silver-white metal. It has many of the same applications. The largest application is in automobile catalytic converters, but there are also uses in jewelry, dentistry, surgical instruments, and electronics.

The top producers are Russia and South Africa. The latter nation has fallen deeper into turmoil in recent months.

Mines there have dealt with unreliable electricity and labor strife for years. Operators are now at great risk of the having mine properties seized by government officials.

Diversification can reduce the volatility in any investment and can produce better results – particularly in weaker markets. Just consider the relative outperformance of palladium versus gold and silver over the past 30 months.

Investing in palladium makes sense for investors who anticipate rising demand for cars and trucks which produce lower emissions globally. If the economies of China and India continue to develop rapidly, demand for the metal should keep rising. It will not take a lot of additional demand to completely outstrip supplies.

One wild card is the adoption of electric vehicles, which do not have catalytic converters and require very little of the metal. For now, these types of vehicles are more costly and have severe limitations in terms of range and power.

The number of product options available to bullion investors has grown. The U.S. Mint produced a 1 oz palladium American Eagle for the first time in 2017.

The small issuance of those coins sold out very quickly, but more are expected in 2018 and the number of coins minted will likely increase.

The Royal Canadian Mint has been producing a palladium Maple Leaf since 2005, though not consistently each year. Today, this is the best option for investors who want an official, government issue coin. They are almost always in stock and premiums are affordable.

Finally, investors can get palladium in bar form. Bars in assay packaging from Swiss refiners such as PAMP and Credit Suisse are comparably priced to the Maple Leaf. And there are more size options available – including 1-gram and 10-ounce.