Overall, Bitcoin price lost 45% of value in the first quarter, representing a loss of $130 billion to its total market capitalization. 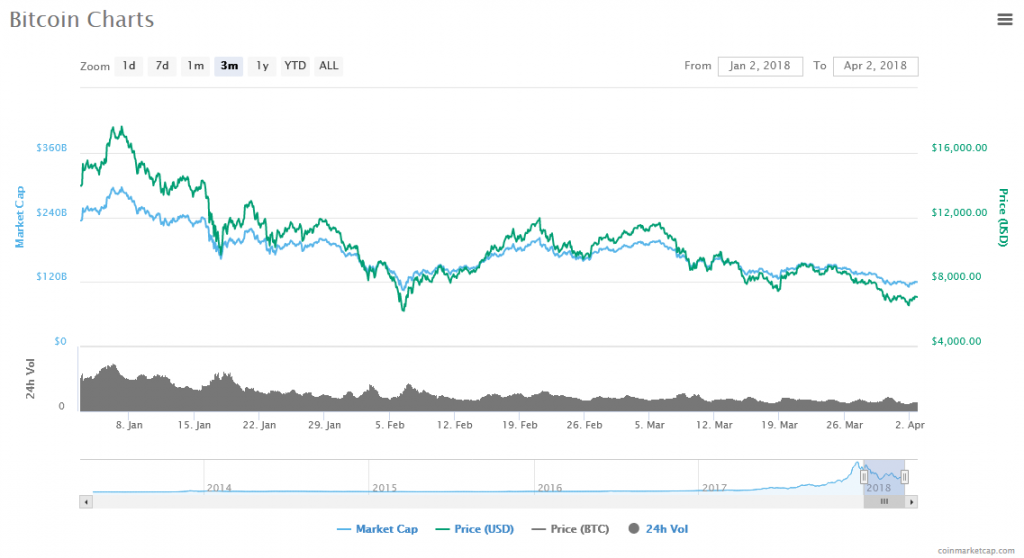 The downward trend in BTC price has prompted a sharper selloff in altcoins. The total cryptocurrency market cap was standing at around $250 billion at the end of the first quarter, down substantially from the peak of $830 billion it had hit at the beginning of the quarter.

Bears had successfully controlled crypto markets despite the strong resistance from bulls. Regulators warnings, analysts bashing and illegal activities supported bears in collapsing BTC price. Regulators all around the globe started a crackdown on crypto markets, due to its unregulated nature and stunning growth in trading activities.

The threat of money laundering, tax evasion, and other criminal activities through digital currencies forced countries like China and India to ban cryptocurrency platforms completely.

However, the market has also been getting the room for potential growth from the rest of the world. Using a G20 platform, regulators from 20 important countries ruled out the possibility of imposing a complete ban on bitcoin and other digital currencies. Instead, they advised the rest of the countries to regulate cryptocurrencies in order to wipe out criminal activities and unfair practices.

The Outlook is Gloomy

The cryptocurrency market has been under pressure over the last couple of weeks. Bitcoin trades in the range of $7000, while the majority of altcoins are standing around the lowest level in the last four months. Some market participants claim bitcoin price will bounce back sharply in the days to come, amid increasing regulations and the limited coin supply. On the other hand, bears expect a complete collapse; they claim bitcoin and other digital currencies don’t have any fair value and the prices are only moving on speculations.